TUBE 2020 is postponed and will now be held from 7th till 11th December!

Jesenice, 22nd June 2020 – The Jesenice sports association, celebrating its 60th anniversary this year, held its traditional award ceremony for the athletes with the best results achieved last year, the people most instrumental in supporting sports, and sports organisations to commemorate their anniversaries, at the Tone Čufar Theatre. To honour their jubilee, the association also awarded two special awards for outstanding contributions made in the development and functioning of sports in Jesenice – the highest award was received by the company SIJ Acroni, for their support of sports in Jesenice going back over 80 years.

Branko Jeršin, a member of the executive committee at the Olympic Committee of Slovenia – Association of Sports Federations (NOC SLO) started his introductory address by touching upon some current affairs in sports, "This year, we are celebrating two important anniversaries. The Jesenice sports association marks 60 years since its foundation, while organised sports in Jesenice celebrates its 75th anniversary. We have every reason to celebrate, but we are also aware that difficult times lie ahead. Even though our activities are returning to more or less normal, the future will be full of challenges. In these times, it will be especially important to get as many volunteers as possible involved with our work, which is why I am particularly pleased that today's recipients of awards will be able to serve as an example for others wanting to take part."

This year, the special award for outstanding achievements in sports went to Žiga Samar, a member of the Real Madrid U18 basketball squad, who won both the Spanish national championship, the U18 Euroleague and he was part of the Slovenian national team, which won the bronze medal at the U18 European Championship, where Žiga also made it to the All-Star-Five. To honour its 70th anniversary, the Jesenice sports association also presented a special award to the marksmanship association Triglav Javornik Koroška Bela. But one of the two highest awards presented by the Jesenice sports association went to mag. Lidija Dornig, the long-standing headmistress of Jesenice secondary school for the exceptional support they provide to their student athletes as part of their athletics class and the extra effort they exert to make sure that sports is highly valued at the school.

The Jesenice sports association also awarded its most prestigious prize to the company SIJ Acroni, which, following the footsteps of its predecessors, has been supporting sports in Jesenice since 1936, dating back over 80 years to the Carniolan Industrial Company. With their help, sports in Jesenice has gained the needed infrastructure (a football pitch, an indoor skating rink, bowling lanes and an Olympic-sized swimming pool, to name but a few). The steel-producing company has always been closely connected to hockey in Jesenice, but has also provided ample support to other sports in the region. This connection between the company and sports also has wider positive implications.

Mag. Branko Žerdoner, the Managing Director of SIJ Acroni stated upon receiving the award, "We are proud to have been the co-creators of numerous successes in sports in Jesenice and the region, as well as being closely connected to the venerable tradition of the local hockey team from the very beginning. Giving back to the community, encouraging young people to spend their free time engaged in sports and supporting hockey, the town's trademark, as much as we can, have always been at the core of our vision as a company. With the help of the Made of Steel project, a sponsorship initiative by the SIJ Group, we have made it our mission in recent years to awaken the minds of steel of the young in the local community, recipients of sports scholarships and sports clubs. And so, we wish all the best to sports in Jesenice, and keeping with our mission statement – here's to another 60 years of an unyielding will of steel! We will support you as best we can." 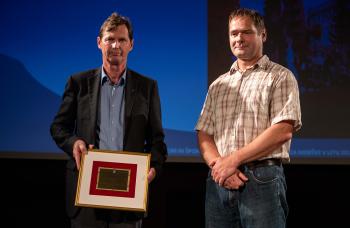